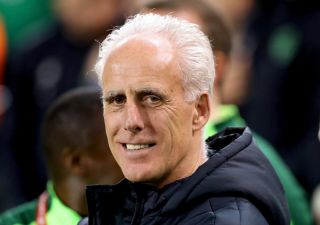 Mick McCarthy has admitted he would rather have his Republic of Ireland players winning every week in the Sky Bet Championship than fighting for their Premier League lives.

McCarthy met up with his 23 members of his squad for the forthcoming Euro 2020 qualifiers against Denmark and Gibraltar in Portugal on Tuesday ahead of a week-long training camp at Quinta do Lago.

He did so with experienced trio Richard Keogh, Glenn Whelan and Conor Hourihane absent ahead of next Monday’s Championship play-off final and Josh Cullen part of the Charlton squad facing Sunderland in the League One decider a day earlier.

Sheffield United quartet Enda Stevens, John Egan and David McGoldrick have already booked their place in the top flight with Scott Hogan having played his part in winning promotion on loan from Aston Villa.

But asked how important it was to have as many of his players plying their trade in the Premier League – predecessors Giovanni Trapattoni and Martin O’Neill repeatedly bemoaned the lack of top-flight performers at their disposal – McCarthy said: “Wouldn’t it be nice if everybody is playing as high as they possibly can?

“But it doesn’t really concern me that because I think when you’re playing at the top of the Championship and playing really well, I think you’re good footballers and you’re competitive.

“Actually, I’d sooner have them playing at the top of the Championship and playing well than being at the bottom of the Premier League and getting battered every week – not that I think that Sheffield United will because I think they’ll cope with it, the way they play.

Ireland face familiar foes Denmark in Copenhagen on June 7 and Gibraltar, who they beat 1-0 in March in McCarthy’s first game back at the helm, three days later hoping to build on a maximum return of six points from their opening two qualifiers.

Southampton striker Shane Long missed those games through injury, but is back in contention after returning to fitness and happily for the Republic boss, in in good form too.

Four of his five goals last season game in his final seven games as he helped to ease the Saints to safety, and although he has not registered for his country since a 3-1 World Cup qualifier win in Moldova in October 2016, McCarthy is well aware of what he can offer.

He said: “It’s always nice to have them in form coming to meet up, that’s for sure. It had been quite a long time, as we know.

“He’d had his trouble with injuries – I was quite concerned, when he left the last time, whether we’d be seeing him in here for this camp, so I’m delighted he has.

“He’s a real threat, Shane, and he creates goals with his physical presence. I’ve had team that have played against him and I know what he’s like, so it’s great to have him scoring goals.”