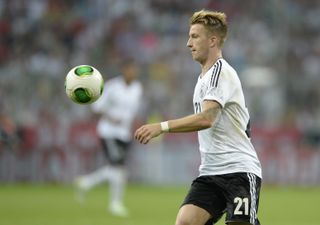 The 24-year-old was substituted for Julian Draxler in Friday's 3-0 win over Austria, assisting Toni Kroos' goal at the Allianz Arena.

However, he is suffering from gastroenteritis and will return to Dortmund for treatment.

A statement from the Deutscher Fussball-Bund read: "Marco Reus will not fly with the German national team to the Faroe Islands.

"The 24-year-old (is) suffering from a gastrointestinal infection."

Germany remain unbeaten in Group C, having won six and drawn one of their seven matches, and can qualify for Brazil 2014 with a win, if Sweden fail to beat Kazakhstan in Astana.

Lars Olsen Faroe Islands side, conversely, have lost all seven of their qualifiers.