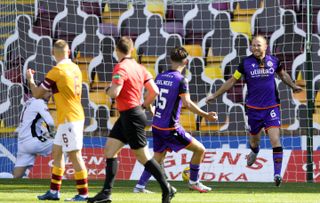 The United skipper netted his first goal for his club to seal a 1-0 Scottish Premiership victory at Fir Park.

The boyhood Motherwell fan, who also netted for Aberdeen in his home town, converted a Luke Bolton cross in the 52nd minute and played his part in a solid defensive display from the visitors.

United were missing main goal threat Lawrence Shankland but they collected their fourth point of the season and left below-par Motherwell with zero.

The hosts announced before the game that a player was self-isolating despite testing negative for Covid-19 twice after what was believed to be a false positive result.

Billy McKay’s late winner made it two wins from two for Ross County as they claimed a 1-0 triumph at Hamilton.

Stuart Kettlewell’s men got their top-flight campaign off to the perfect start with a narrow victory over Motherwell on Monday night.

And they backed it up at the Foys Stadium, with McKay finally breaking Accies’ stubborn resistance with his 75th-minute strike to put the Staggies joint top of the table.

Kevin Nisbet netted a hat-trick as Hibernian extended their perfect start to the season with a comprehensive 4-1 victory at Livingston.

A double from Nisbet and another from Christian Doidge had Jack Ross’ side three goals ahead by half-time.

Livingston narrowed the gap via a Lyndon Dykes penalty but Nisbet claimed the match ball by rolling in a spot-kick of his own two minutes from time.