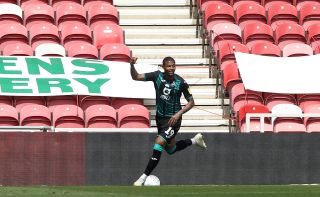 The 20-year-old Liverpool loanee scored twice in three minutes as the visitors ran out 3-0 winners at the Riverside Stadium.

His brace and Andre Ayew’s penalty effectively clinched the points after only 34 minutes.

Cooper said: “In the first half in particular, he looked a real threat. He got his two goals – he was disappointed he didn’t have three.

“He’s a really good player, but we are a team that likes to play as a team. Rhian obviously will get some headlines today because he’s got a brace, but it’s as a consequence of the team playing the way we want to play.”

Brewster celebrated his 18th-minute opener by holding up a t-shirt bearing the message “Our colour is not a crime” in support of the Black Lives Matter campaign on a day when the players of both sides and the match officials took a knee before kick-off.

Cooper said: “Rhian has a voice like everybody else and we all support each other. We’re as one here and it was just another example of that.”

The England Under-21 international doubled his tally in the 21st minute before Ayew completed the job from the spot, in the process maintaining the Swans’ bid for a play-off place.

Cooper said: “We’ve always been in the mix. We’ve never been too far away from the play-off positions if we haven’t been in them, and that will continue after this weekend.

Boro head coach Jonathan Woodgate admitted he was left “stunned” on the sidelines by a first-half display which belied what he had seen on the training ground earlier in the week.

Woodgate said: “It’s hard to explain that type of performance. It wasn’t nice to see.

“In the week if you had seen how we were training, it was very good and to turn in a performance like that isn’t good enough. But we’ve got a week to put it right now.”

Asked about the experience of playing behind closed doors, Woodgate added: “To be honest with you, I didn’t imagine being beaten 3-0, so the experience wasn’t good at all.”