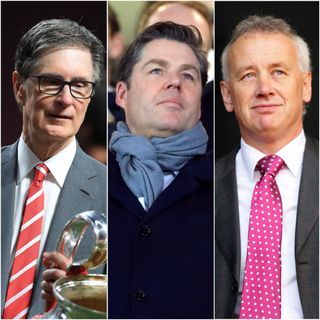 Premier League chief executive Richard Masters insists there is “no beef” with the EFL’s clubs after Project Big Picture plans endorsed by its chairman Rick Parry were rejected by top-flight teams.

The relationship between the competitions was strained to say the least when the PBP proposals became public knowledge at the weekend.

They were developed by Liverpool and Manchester United and, while they included an immediate £250million bailout for the EFL and a 25 per cent share for the league every year in any future Premier League media revenues, they also sought to concentrate Premier League power in the hands of the so-called ‘big six’.

Premier League clubs did not endorse PBP when they met on Wednesday, and they will instead continue work on a “strategic plan” involving all 20 teams. They also agreed to offer an additional £50million in grants and loans to clubs in League One and Two on top of £27.2m already advanced in solidarity payments.

Premier League Shareholders agreed to work together as a 20-club collective on a strategic plan for the future structures and financing of English football— Premier League (@premierleague) October 14, 2020

The Premier League’s offer will now be formally submitted to the EFL for approval, and while Masters said there was “frustration” that Parry had publicly endorsed the PBP plans, the relationship between the leagues would endure.

“Clearly there’s some frustration a proposal that hadn’t had any input from the Premier League, from our clubs, has been pushed so hard in public,” he said.

“But we don’t have a beef with the EFL, certainly not with its clubs. We want to have a good relationship with them. We’re their biggest partner.

“We have a historic relationship with them. So we want it to be constructive.”

Culture Secretary Oliver Dowden had earlier warned Parry not to be distracted by PBP, which he described as “this latest wheeze”, and urged the leagues to continue talks over an EFL rescue package. He also described it as ‘Project Power Grab’.

This morning I reiterated calls of many in the football family for bigger clubs to look after smaller clubs— Oliver Dowden (@OliverDowden) October 14, 2020

He has welcomed the Premier League’s offer to Leagues One and Two as “a good start”. The Premier League said discussions would continue over possible loans to clubs in the Championship.

Masters said the Premier League meeting on Wednesday had been “candid, constructive and positive” despite the involvement of two of the clubs in drawing up the PBP proposals.

“Whilst there has been a lot of things said and done, a lot of speculation over the last four days, I don’t think it’s irreparably damaged the Premier League. And I think that today’s meeting proved that,” Masters added.

FA chairman Greg Clarke said on Tuesday he had walked away from Big Picture discussions in the spring “when the principal aim of these discussions became the concentration of power and wealth in the hands of a few clubs with a breakaway league mooted as a threat”.

However, Masters said: “I don’t think anybody has been talking about breaking away.”

Asked if there were any elements of PBP that could be worked with, Masters said: “Well, I think there was an acknowledgment in the room that English football’s model is a huge success, but that it hasn’t been reviewed or modernised for a long time.

“And so that perhaps there have been some systemic issues built up that need dealing with.

“And as I said, a lot of the things we’ve been talking about – league structure, calendar construction, governance, the financial regulation, broadcasting and commercial will all be part of our review process as well.”

Project Big Picture has, at least, provoked a much-needed conversation which the EFL hopes can be involved in going forward.

“As we have maintained across the past 72 hours, there is a significant issue facing the English footballing pyramid and therefore it is encouraging that there is an acknowledgment that a review of the current status quo is required, with a strategic plan to be developed to consider the future of the football,” said a statement.

“While by no means a finished product, Project Big Picture was developed to consider these same issues and address the challenges facing football from top to bottom.

“The EFL welcomes the opportunity to contribute to any wider debate with colleagues across the game as we seek to finally address impossible economic pressures and deliver on the objective of having a sustainable EFL in the long-term.”