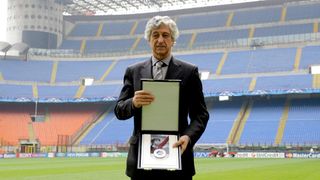 Gianni Rivera would be happy to see Alessandria beat AC Milan when his two former clubs meet in the Coppa Italia semi-finals, but only if the Rossoneri finish the season in a Champions League qualification place.

The former Italy star made his professional debut for Alessandria before moving to San Siro in 1960, leaving him with split loyalties ahead of the first leg next Tuesday.

However, if Milan can earn a return to Europe's premier club competition for the 2016/17 campaign by finishing in Serie A's top three, then the 72-year-old would be more than happy to see the underdogs progress.

"It won't be easy because two teams that were important to me at different times will be squaring off," he told Gazetta World.

"I hope that Milan can reach the Champions League by finishing well in the league while I hope Alessandria can progress in the Coppa Italia. I would gladly accept that."

Alessandria booked their place in the semi-finals with a 2-1 victory over Spezia on Monday but Rivera wasn't surprised to see the Lega Pro side in the last four.

"I agree … that the Coppa Italia is important in terms of publicity, but now we must also try to secure promotion. Alessandria must return to the top."