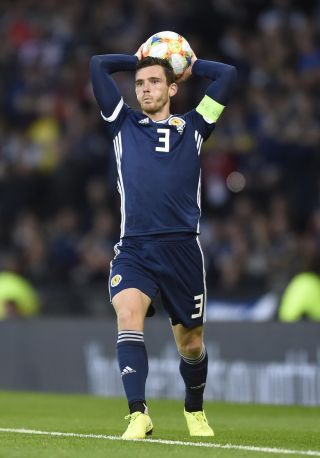 Captain Andy Robertson hopes Scotland’s comfortable 6-0 victory over minnows San Marino can be a springboard as they look to build momentum ahead of the Nations League play-offs.

Liverpool defender Robertson was delighted with Scotland’s performance on a wet evening at Hampden Park, regardless of their opponents’ lowly status in world football.

Proudest moment of my career by far. A night I will always remember 🏴󠁧󠁢󠁳󠁣󠁴󠁿 ⚽️ pic.twitter.com/TFrmXFNCs2— Stuart Findlay (@stuartfindlay95) October 13, 2019

And he hopes the display can push them on as Scotland prepare for March’s Nations League play-offs, which provide a route to Euro 2020.

Robertson said: “Only time will tell but I really hope that now we can kick on from this performance.

“I know it’s only against San Marino and I’m sure a lot of people – the negative people – will say that but it wasn’t about our opponents, it was about how we went about our business and I thought we did it brilliantly.

“When you have a fragile squad and a squad that’s low on confidence then it’s always tough. Hopefully this result will kick all of us on.

Watch the highlights as a John McGinn hat-trick, along with strikes from Lawrence Shankland, Stuart Findlay and Stuart Armstrong seal a 6-0 win over San Marino at Hampden.#SCOSMRpic.twitter.com/HBt6VYqYbv— Scotland National Team (@ScotlandNT) October 14, 2019

“It’s not been easy but we knew we had a chance to put 100 per cent in and put a performance in.

Robertson admitted things have been difficult for Scotland following defeats in the double-headers against Russia and Belgium but insists the players knew how to cope and was pleased to see them bounce back.

He added: “I don’t like losing – I think it’s the same as all the boys – none of us like losing.

“But maybe as captain it maybe falls on me a bit more and that’s fine.

“Look, it has been tough, don’t get me wrong, but all footballers are made in a different way to the normal person – we know how to deal with this.

“And I’m no different to that. I play at a top club where if you put in a bad performance you get criticised and it’s no different here.

“It has been tough but it’s about kicking on from that and luckily we got the result that hopefully can really kick us on now.”