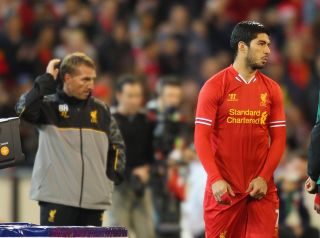 Rodgers is the latest figure in football to voice his frustration at the length of the transfer window, particularly with Premier League clubs required to play three fixtures before it closes this season.

As seen with the attempted transfers involving Suarez, Gareth Bale and Wayne Rooney, complex deals take time to get done, and Rodgers would prefer his business to be concluded prior to their season beginning.

Rodgers said on Friday: "I just think there's something morally not right when players are sat in the changing room and the season has already kicked off, you're underway in your job, and I'm sure every changing room in the country - no matter what level it is - there'll be players asked and agents working to get them to other clubs.

"But I believe it should finish once the season begins, and what you'll find after the weekend once Monday passes, everything returns to the norm and clubs are a much better place then."

Suarez has been regularly linked with moves to Real Madrid and Arsenal in the close-season, but the Uruguayan – who is banned for another three matches after biting Chelsea defender Branislav Ivanovic – is reportedly still keen on an Anfield exit.

Rodgers refused to comment extensively on Suarez's future, but did reveal that he was impressing in training as his bid to gain match fitness continues.

"I think I said last week, I'll talk about the players that's available," he said.

"What I will say is he has been working very hard in training and played a game behind closed doors.

"The focus is purely on getting him up to match fitness by the time he's available but really concentrating on the players that are available."