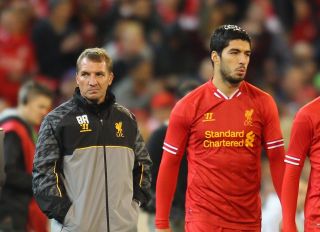 As speculation over the striker's future rumbles on, Rodgers is keen to avoid talking any more about Suarez until he is once again available for selection.

The wantaway Uruguay international is suspended for the first six games of the season following the punishment dished out for his bite on Chelsea's Branislav Ivanovic, while Rodgers has already confirmed that he will not be part of a matchday squad until he apologises to his team-mates and the club.

Regardless of Rodgers' stance, the saga continues to cast a shadow over Liverpool's preparations for the new campaign, ahead of their opening-day clash with Stoke on Saturday.

But following a promising pre-season in which new arrivals Simon Mignolet, Iago Aspas, Luis Alberto and Kolo Toure have all made an impact, the Liverpool boss is not about to let their efforts prove in vain.

"There's too much good work gone on here for it to be overtaken by anything else," Rodgers said.

"The players have worked so hard, their concentration has been brilliant and we are all very determined this year. I can't let anything detract from that.

"Nothing can sabotage what we are trying to do. I don't really want to go on about it. It's just something we cannot afford to happen."