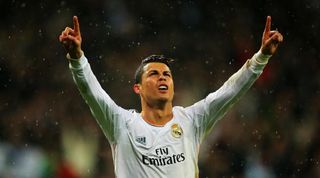 Real host Bayern in the first leg of their UEFA Champions League semi-final tie looking to continue their quest for the treble and a 10th title in Europe's premier club competition.

FIFA Ballon d'Or holder Ronaldo has missed the club's last four games, including a 2-1 win over Barcelona in the Copa del Rey final, because of a knee and thigh problems.

The Portugal forward returned to full training on Monday, but Real boss Carlo Ancelotti has insisted the 29-year-old will only play if he is fully fit.

"Cristiano trained normally today, (and has) trained well these last days," the Italian said. "We will make a decision after another test tomorrow (Wednesday). He will play if he is totally fit.

"We are confident but the decision will be made tomorrow (Wednesday). If there is any risk he will not play. We have another decisive game next Tuesday (in the second leg)."

Ancelotti also confirmed that left-back Marcelo will be among his substitutes on Wednesday as he continues his recovery from a hamstring problem.

"Marcelo only returned to training on Monday so he will be on the bench. (Fabio) Coentrao will start the game," he added.

Ancelotti expects Bayern, coached by former Barca boss Pep Guardiola, to play with a similar philosophy to the Catalan club, and called on his team to replicate their performance in last week's Copa final.

"We will face a very strong team," the ex-Milan boss explained. "They (Bayern) won the league a month ago. It's normal that we are not considered as favourites.

"We played with 11 players against Barcelona and were compact and solid. It will be the same tomorrow.

"Their philosophy is similar to Barcelona's. We have to be compact to control the match."