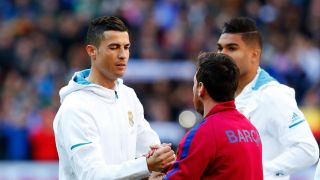 Cristiano Ronaldo has enjoyed sharing Ballon d'Or honours with Lionel Messi over the past decade and insists he is not "obsessed" by football's most celebrated individual award.

You have to go back to Kaka in 2007 for the last time the award went to any player outside of this era's dominant performers and Messi is well-placed to make it 6-5, given Barca's vice-like grip on the title race in LaLiga this time around.

"To be honest, I never thought I'd win one Ballon d’Or or two, and certainly not five. So, if I can't win the Ballon d'Or in the future, I'll still feel so, so, so, proud of myself," Ronaldo said, in quotes reported by AS.

"Of course, my ambition is to win more individual awards and trophies with the team, but I won't be obsessed with the Ballon d'Or.

98 - Cristiano Ronaldo has now scored more goals for the same club than any other player in history (Lionel Messi, 97). Immaculate. November 21, 2017

Madrid are 19 points behind Barcelona and lie fourth in LaLiga having been dumped out of the Copa del Rey by Leganes in midweek.

A tough trip to Valencia awaits on Saturday but they retain a star player still fixated on improvement as he enters what should prove to be the final stages of a stellar career.

"I have to prepare myself to stay at elite level," Ronaldo explained. "For me, age isn't so important if your look after your body and mind, do the right things and work in the right way, with care.

"Age isn't important. These last two years have been the most successful of my career, 2017 was a great year and shows that age really isn't the most important thing.

"I'm happy and can carry on for a long time yet. I'm keen to work, to enjoy working with people, winning trophies. I'm good, I’m ready for a few more years."