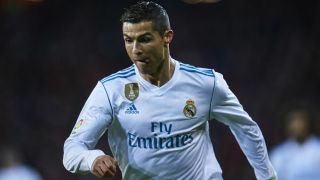 Cristiano Ronaldo's decision to leave Real Madrid for Juventus brings to a close one of the most fruitful relationships in the history of football.

The iconic attacker's nine-year stint at the Santiago Bernabeu has coincided with a period of sustained success for the club, the forward winning a remarkable four Champions League titles during his time in Spain.

Ronaldo has also been recognised individually, sharing the last 10 Ballons d'Or with Barcelona rival Lionel Messi, including one victory with Manchester United prior to his Madrid move.

A number of players have come close to breaking their stranglehold on the award over the past decade, but sustained quality and spectacular feats of goalscoring ensured their iron grip is as tight as ever.

As Ronaldo looks to impose his brilliance on another of Europe's top leagues, we shine a spotlight on the five breath-taking seasons when he claimed world football's top individual honour.

2008: The 2007-08 season with Manchester United provided the first evidence of the Portuguese’s soon-to-be-common eye-popping goal tallies, netting 42 times in 49 games. That haul led to United lifting both the Premier League and the Champions League in a memorable season for Alex Ferguson's side.

2013: It is testament to Messi’s stunning form at Barcelona that Ronaldo had to wait another five years for his next Ballon d'Or. No-one could say that he did not deserve it, though – a whopping 59 goals in 50 games in the calendar year confirming his status as one of the finest players to ever play the game.

2014: Ronaldo continued to plunder goals at an incredible rate in 2014, but this time they led to a host of silverware for his club. His record of 56 goals in 51 games helped Madrid win the Copa del Rey, UEFA Super Cup, Club World Cup and the one they wanted so badly – a 10th Champions League title.

2016: Another impressive club return of 44 goals in 42 games in 2016 helped Madrid claim another Champions League triumph, as well as Super Cup and Club World Cup trophies, but his crowning glory was leading Portugal to an unlikely, and emotional, European Championship win.

2017:  Ronaldo helped Madrid land another Champions League crown as they triumphed over Juve in Cardiff, as well as tasting glory in LaLiga. But few will have predicted when he was handed the Ballon d'Or trophy in Paris in December that it would be his last award as a Real Madrid player.