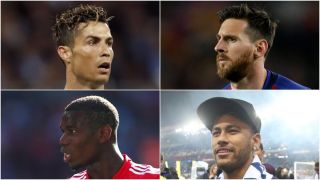 Cristiano Ronaldo, Lionel Messi and Kylian Mbappe lead the nominees for the Best FIFA Men's Player award, but Neymar and Paul Pogba have not made the shortlist.

Neymar finished third in the voting last year but, despite winning four domestic trophies with Paris Saint-Germain after leaving Barcelona, an underwhelming World Cup on his return from a fractured foot saw the Brazil superstar omitted.

Pogba shone at Russia 2018 as France won the World Cup for the first time in 20 years, but the Manchester United midfielder did not follow international team-mates Mbappe, Antoine Griezmann and Raphael Varane on to the list.

Varane is the only defender included, alongside his Real Madrid colleague Luka Modric - the World Cup's Golden Ball winner.

Ronaldo has won the award in each of the two years since the prize was launched, with Messi second on both occasions.

Fans have a chance to vote for their winners, with the victor to be announced at a London ceremony on September 24.