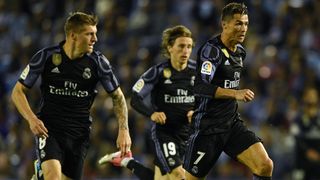 Cristiano Ronaldo's early goal against Malaga on Sunday ensured Real Madrid have scored in every match in a LaLiga season for the first time in the club's history.

Ronaldo struck in the second minute at La Rosaleda, the forward finishing off a precise Isco throughball to put his side in front and score his 16th goal in 16 league games against Malaga.

Madrid have now scored in 64 consecutive games in all competitions, with Zinedine Zidane's team extending the record they took from Bayern Munich by beating Sevilla 4-1 on May 14.

Zidane's men need only a point against Malaga to clinch the Liga title for the first time since the 2011-12 campaign, with rivals Barcelona three points behind and in action at home to Eibar.

Real Madrid have scored in every match of a season for the first time in their history! May 21, 2017