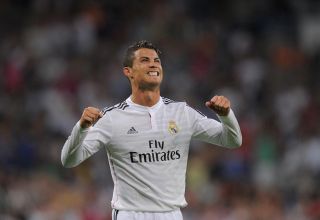 Ronaldo landed the FIFA Ballon d'Or in January and secured yet another gong at an awards ceremony in Monaco following the UEFA Champions League draw, beating off competition from Bayern Munich duo Manuel Neuer and Arjen Robben.

The prolific 29-year-old was outstanding once again for Spanish giants Real in the 2013-14 campaign and broke the record for Champions League goals in a season by finding the back of the net 17 times as the club was crowned European champions for the 10th time.

The former Manchester United man recognised the contribution made by his team-mates when he was presented with the award, which was voted for by journalists.

"I'm really, really happy. I have to say thank you to my team-mates, because without the team individual awards are impossible," he said.

"It was a fantastic year, a dream year, so I'm so proud of my team, my coach and the fans."

Ronaldo scored 31 goals in 30 La Liga games for Carlo Ancelotti's side last season and the Portugal captain also fired his country to the World Cup finals in Brazil, scoring four goals over two legs in their play-off victory against Sweden.

Robben enjoyed another stellar campaign for the Bavarian giants and was one of the stand-out performers at the World Cup as Netherlands finished third.