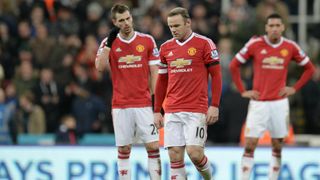 Manchester United captain Wayne Rooney bemoaned poor concentration after his team-mates were forced to share the spoils with Newcastle United.

Rooney scored a brace and set up another as United twice surrendered a lead in a thrilling 3-3 Premier League draw at St James' Park on Tuesday.

A Rooney penalty and Jesse Lingard's 38th-minute strike had United on track for a routine win until Georginio Wijnaldum pulled a goal back three minutes before half-time.

Newcastle converted a spot-kick of their own via Aleksandar Mitrovic past the hour-mark, but Rooney's thunderous long-range effort restored United's lead with 11 minutes remaining, only for Paul Dummett to equalise in stoppage time.

"It does feel like a defeat," Rooney told BBC Sport.

"After scoring three good goals, it was maybe a lack of concentration – not staying with runners for the third – and that is disappointing.

"If you take a two-goal lead, we should be taking all three points and killing the game off. We didn't take all our chances and we have been punished for it.

"We always want to try and play entertaining attacking football that is what we work on and try and do, and hopefully we can come up with more solutions."

With West Ham winning 3-1 at AFC Bournemouth, United dropped to sixth in the standings, two points adrift of fourth-placed Tottenham after just one win in eight league matches.