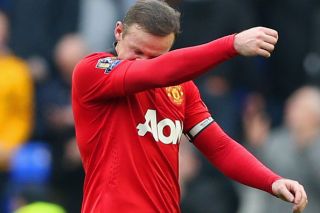 The soon-to-be-deposed Premier League champions were poor at Goodison Park, as first-half goals from Leighton Baines and Kevin Mirallas saw Everton make it eight wins from their last nine matches.

United's lack of response after the break would have been particularly concerning for under-fire manager David Moyes, who returned to former club Everton without success.

"Everyone knows that it's a difficult place to come and Everton made it difficult for us by putting bodies behind the ball," he told MUTV.

"But we conceded two really sloppy goals which we need to cut out because we're making it hard for ourselves to get back into games.

"Obviously, once they got the first goal we knew it would be tough and the second goal was a big blow.

"It's not nice when you concede just before half time at a place like this. Everton are in good form and they've got a lot of confidence so we knew it would be hard."

Rooney was also disappointed with his side's ability to convert possession into chances on goal.

"I thought that in the first half we moved the ball well, but we just didn't penetrate enough," the England international added.

"We moved the ball quite well and they were struggling to get near us at times, but we just had to try to break them down.

"They sat quite deep, so we might have needed more width or more runners in behind to create space, but it was a difficult game."