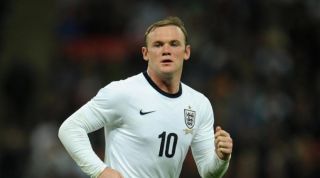 Rooney was always the likely replacement for the retired Steven Gerrard and will now lead his nation through their Euro 2016 qualifying campaign.

"I gave it a lot of thought but I think Wayne is an obvious choice, to be honest. He certainly deserves it," Hodgson said on Thursday.

"He is now the captain of Manchester United.

"I'm pleased to say that I've been able to offer it to him and I've had a long conversation with him. He wants to take on that enormous responsibility.

"With his 95 caps and all the goals he has scored [40 for England] and all the things he has already done from such a young age, he is prepared to take responsibility.

"All I can hope for really is that he continues to play well and that he shoulders the responsibility of captaincy as well as the captains before him."

Hodgson rejected the suggestion that Rooney's captaincy heralded a new England era, though, and wants his side to build on their progress since he took charge in 2012.

"I think we were bitterly disappointed not to do well in the World Cup," he added.

"After the preparation and how we did in the first game, we had high hopes.

"I think it's more a question of continuing… continuing a line we have already started on, which is giving younger players a chance to play."

Rooney said Hodgson's decision to give him the captaincy was a "dream come true" and that he would seek out Gerrard for tips on how to deal with the role.

"To be named as England captain is a dream come true for me personally, and of course my family," he told the Football Association's website.

"It is something that I will take massive pride in doing. As a kid I always loved watching a big England game on the television.

"Back then I had a burning ambition to play for my country. To be appointed captain is beyond my wildest dreams.

"I would obviously like to thank Roy and the coaching staff for having the belief and confidence in me to do the job.

"I have played under some fantastic captains at both Manchester United and England and would hope that I have picked up some of their strongest qualities.

"I intend to speak with Steven about different aspects of the role. We had a great relationship from the moment we played together for our country and right up to our final game in Brazil. I am sure if ever I need to seek his advice he will be there to help.

"I would hope that I have the full backing of the fans, I am their type of player.

"My only thought is to win and give everything I have got, and that desire will be the way I want to captain the team.