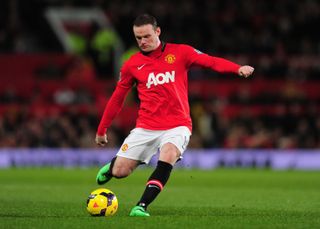 England striker Rooney has been recovering from a groin injury, which has kept him out since New Year's Day, on a warm-weather break in Egypt with his family and one of the club's fitness experts.

But, despite having returned to training with the squad, Moyes revealed that this weekend's Premier League clash at Stamford Bridge will come too soon for Rooney.

"Wayne's come back, he's fresh but he's not ready for Chelsea," Moyes said. "He's training, he's on the grass, doing some running and looking quite good.

"He's had a break, done a lot of strengthening work around his groin and hopefully enjoyed a few days in the sunshine as well. Hopefully he'll benefit from it, but not for this game.

"I don't want to put a date on it just now as I don't want to say he'll be fit for whatever game and then I find he's not, but we've just got to take it bit by bit. I've watched him running today; he looks well and is in really good condition."

Meanwhile, Van Persie will also be absent as he continues his rehabilitation from a thigh injury, although Moyes hopes that the Dutchman could be back in training next week.

"I'm hoping Robin has a good chance of training at the start of next week, so if I can get him back out on the grass and back with us, it'll be a great boost for us all," Moyes continued.

"He's a really important player and a player we've missed. But he's getting closer now and most of them are getting closer to fitness, so let's hope it's not too long until we get them back."

Moyes also confirmed as his press briefing that midfielder Anderson would be joining Serie A side Fiorentina on loan, adding : "We've not been able to get him as many games as he'd have hoped."