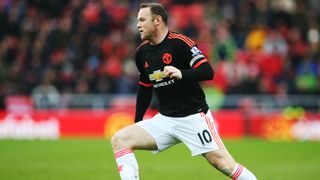 Wayne Rooney does not require knee surgery but the Manchester United captain will not be ready for England's upcoming friendlies, with manager Louis van Gaal insisting he is the club's priority.

Rooney has been sidelined since damaging ligaments in his knee against Sunderland on February 13.

The 30-year-old, who had scored seven goals in nine appearances in all competitions this year, is expected to remain in a knee brace for almost another three weeks.

And while Van Gaal does not believe knee surgery is necessary, in a boost to England's Euro 2016 hopes, the Dutchman warned Roy Hodgson that his skipper will not be fit for friendlies against Germany (March 26) and Netherlands (March 29) next month.

"He has to be ready for us first, not for the English team," Van Gaal said.

"Wayne has a brace now and he has to wear it for two-and-a-half weeks.

"Then we have to look again, so I cannot say anything about that now.

"Now he is resting because of the brace."

United will be without Rooney for the visit of Arsenal at Old Trafford on Sunday, with Van Gaal and Co. looking to reclaim fifth position in the Premier League.