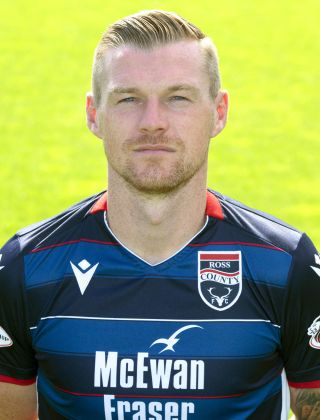 Ross County and Hearts played out an entertaining 0-0 draw at the Global Energy Stadium with Billy Mckay missing an early chance for the home side.

It was the proverbial game of two halves, with the Staggies looking in control for the first 45 minutes but Hearts came back into the tie and were the better team after the interval.

At the end of the day though, neither team will feel they benefit from the result with both sides desperate for all three going in.

Ross County had the better of the first half, but not much to show for it on the scoreboard by the interval.

Mckay had a golden chance to put the Staggies ahead in the third minute on a counter attack from a Hearts corner, but he managed to shoot straight at Joel Pereira in the Jambos goal.

Josh Mullin then showed signs of last season’s impressive form, setting up chances for Blair Spittal and Coll Donaldson, with the latter going closest with a header that just missed the mark.

For all the domination though, with Nathan Baxter not having a save to make in the first 45 minutes, it was still a stalemate at the interval.

The second half progressed much as the first ended, but a scramble in the County box just before the hour was a reminder that Hearts were not out of proceedings.

That led to a spell where the Jambos grew in confidence and started controlling the game, but they still found sights of goal hard to come by.

Baxter remained quiet, with a lob from Oliver Bozanic that was always unlikely to find the net the closest Hearts came.

County responded with just under 15 minutes left on the clock with a brilliant passing move from the right that culminated in Donaldson flicking through for Lee Erwin, who shot straight at Pereira from a fairly tight angle.

It seemed as though the match was set up for an open final 10 minutes, with both teams desperate to find a winning goal but nobody could produce that moment of quality to make the difference and find a winner.

The point apiece leaves Hearts four points adrift of Hamilton at the foot of the table, while County are four points clear of the relegation play-off place.