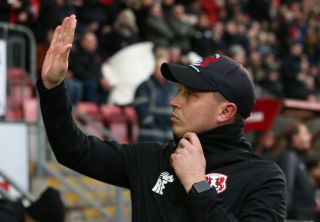 Leyton Orient have promoted assistant coach Ross Embleton to the role of head coach on a permanent basis after an interim spell in charge.

The 38-year-old stepped up from his number two position after boss Justin Edinburgh died in June and managed the O’s until Carl Fletcher was appointed in September.

Fletcher was sacked within a month and Embleton took over as interim head coach again, but will now take on the role permanently after agreeing a 12-month rolling contract.

Chairman Nigel Travis told the official club website: “For a number of reasons it has been a difficult season and therefore the board, alongside (director of football) Martin Ling, have been very deliberate in the search for the club’s new head coach and we are pleased to appoint Ross Embleton to that role.

“The club have held ongoing discussions with Ross over recent weeks relating to improving on-field results, the development of the first-team squad and Ross’ own desire to take up the role.

“We are confident that Ross is the right person to lead the O’s forward. His ability to lead the players, and his coaching staff, is superb and he provides stability, which is essential, given the events of the season.

“Ross will be encouraged to reinforce the first team through the January transfer window, which began with the signing of Lawrence Vigouroux and the extension of George Marsh’s loan.”

Orient are 19th in Sky Bet League Two and extended Marsh’s loan deal from Tottenham until the end of the season on Monday.