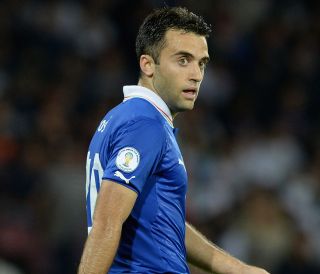 The Fiorentina striker came off the bench as Italy ended their qualifying campaign, which saw them top UEFA Group B, with a 2-2 draw with Armenia on Tuesday.

The 26-year-old made his first international appearance in over two years, after being sidelined with back-to-back anterior cruciate ligament injuries.

Cesare Prandelli included the former Villarreal striker in his squad, following a blistering start to Serie A season that has seen Rossi notch five goals in seven appearances.

He told Rai Sport: "It has been a beautiful feeling to play with the national team again, to step on the field wearing the Azzurri colours and play alongside my team-mates.

"The spot is not mine yet. We are trying to create a great group and there are many strikers that are in fantastic condition."

Rossi also admitted Italy were not at their best during the draw with Armenia and felt a point apiece was a fair reflection of the match.

He added: "Against Armenia, there were a few distractions at the start and unfortunately in football these things can happen.

"But the important thing is that we reacted well and were determined to get the result.

"I would say the draw was a good result."