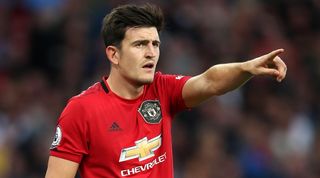 The England international became the most expensive defender ever when he joined from Leicester City.

But Keane is yet to be convinced that it was a worthwhile investment, after seeing the 26-year-old get caught out during his start to life at United.

“We were talking about how good he is on the ball, but defensively I still think he's… I still have one or two question marks over him.

“I always worry about his pace on the turn. I remember the first goal against Crystal Palace where he's not doing the basics, covering round his other centre-half.

“Listen, he's 26 years of age now, you're worried if you're pointing these things out to him.”

Maguire has started all four of United’s Premier League games so far this season, but his new team have failed to keep a clean sheet since the opening day 4-0 win over Chelsea.