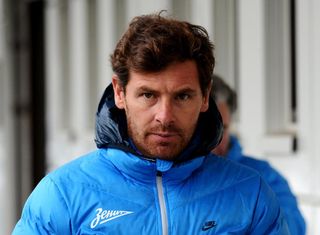 The Portuguese took over as Zenit head coach last Thursday, and saw his charges keep their title hopes alive as Hulk scored early in both halves at the Stadion Petrovskij.

Villas-Boas was forced to endure some uncomfortable moments, though, as Ibragim Tsallagov pulled a goal back on 54 minutes before Luis Caballero failed to convert two penalties as the visitors let Zenit off the hook.

The narrow win keeps Zenit within three points of leaders Lokomotiv Moscow after the pacesetters proved too strong for strugglers Ural on Saturday.

Aleksandr Belozerov's own goal and a Dame N'Doye effort had the hosts two goals to the good after just 14 minutes, before Sergey Tkachev added a third 13 minutes from time, with Belozerov's miserable day completed thanks to a second yellow card late on.

Zenit are now firm favourites for a return to the Champions League at least, however, after both Spartak and Dinamo Moscow failed to pick up maximum points.

Ari's hat-trick, along with a goal from Wanderson, saw Spartak comprehensively beaten by Krasnodar on Saturday, while Dinamo were held to a goalless draw by Rubin Kazan 24 hours later.

With Zenit second on 44 points, Moscow neighbours Spartak, Dinamo and CSKA all sit level on 40 in the UEFA Europa League spots after the latter comfortably brushed aside bottom-placed Anzhi Makhachkala.

Seydou Doumbia struck a brace in their 3-0 win at the Anzhi-Arena on Monday while, elsewhere at the wrong end of the table, Tom Tomsk' and Terek Grozny have renewed hope of beating the drop following potentially crucial victories.

Tomsk' left it late to secure a 1-0 win over Volga - Jan Holenda scoring in the 90th minute to condemn Volga to a fifth straight league defeat and 10th game without a win.

Vasiliy Baskakov's charges now sit 12th and, while Terek Grozny remain in the relegation play-off spots, their third win in four games gives them a fighting chance of staying in the top tier.

Ailton Almeida and Marcin Komorowski got the crucial goals in a 2-1 win over Kuban Krasnodar while Amkar Perm were held at Rostov on Friday, despite leading 3-1 with two minutes of normal time remaining.

Having seen Amkar's Jakub Wawrzyniak sent off, the hosts utilised their numerical advantage as Artem Dzyuba and Vitaliy Djakov scored at the death to snatch a point and derail the visitors' Europa League push.