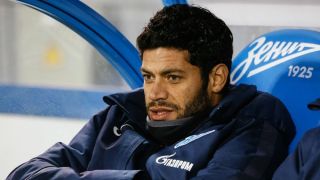 A section of the home support directed monkey chants at Hulk at Saturn Stadium in a game that saw Arnor Smarason equalise the Brazil forward's first-half opener in injury-time.

Hulk responded by blowing a kiss in the direction of the perpetrators before calling on fans to "respect all of the players" in a post-game interview.

Discussing the result, forward Ramil Sheydaev remarked: "Of course a tie - it's bad. For us it's the same as a loss.

"But that's it, we are already getting our thoughts ready for the [next league] game with Dynamo [next Sunday], which is really important for us."

Before their clash with Dynamo Moscow, Zenit visit Torino in the second leg of their UEFA Europa League last 16 tie, holding a 2-0 advantage from the first.

Zenit's dropped points sees defending champions CSKA Moscow close to within five at the summit - winning their fifth league match on the bounce with a 4-0 victory over Mordovia Saransk, who were reduced to 10 men after 20 minutes.

Krasnodar pulled level on points with Dinamo with a 1-1 home draw against Ural, while Lokomotiv Moscow's 1-0 home defeat to Arsenal Tula damaged their chase for a UEFA Europa League spot.

Rubin Kazan are now level on points with the fifth-placed side following a 2-1 victory over 10-man Terek Grozny.

The bottom four are now all tied on 14 points, two adrift of safety.