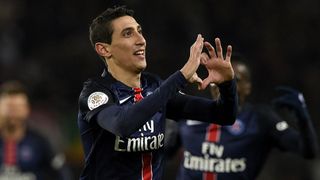 Paris Saint-Germain can equal a Ligue 1 record that has remained unbroken for over 20 years when they travel to play Saint-Etienne on Sunday.

Laurent Blanc's champions are unbeaten in their last 31 Ligue 1 matches dating back to last season and are now one away from making it 32, equalling Nantes' longstanding record which was set between July 1994 and April 1995.

PSG have won 19 of their 22 league games this season and go into the weekend an astonishing 21 points clear of nearest rivals Monaco, who have picked up just 10 victories.

They have picked up 60 points from 22 games, which is the best tally ever recorded in the French top flight at this stage of a season.

Saint-Etienne, meanwhile have won only five of their last 15 league contests, losing eight of those.

But despite that, they still sit sixth in the table and within three points of Nice in the third Champions League spot, with head coach Christophe Galtier demanding an improvement ahead of PSG's visit.

"The players and I have had direct discussions," he said. "It never passes through the media or through intermediaries. My players are respectful and professional.

"I have the right and duty to be demanding with my players. We were not very good in the last game [a 1-1 draw at Reims] and there are reasons including absences and accumulation of matches since the season started.

"But we are still able to get the results, with four points picked up in the last two matches. We are still there in the Coupe de France, Ligue 1 and the Europa League.

"You cannot choose your matches. If we are not at 120 per cent or 130 per cent when we are playing the top-ranked teams, they will overpower us."

PSG won the previous league meeting between the two teams 4-1 in October, as well as beating Galtier's men 1-0 at Parc des Princes in the Coupe de la Ligue in December.

Edinson Cavani scored in both of those matches and he could do with another in this game after his relationship with Blanc came under further scrutiny following the head coach's admission the striker was not perfectly suited to his tactical system and revealed his behaviour had been discussed with senior players.

PSG defender Gregory van der Wiel is out for a "number of weeks" after undergoing appendix surgery, while the away side have been without Thiago Silva (knee), Marco Verratti (hip), Javier Pastore (calf), Marquinhos and Salvatore Sirigu (both groin) in recent matches.

- Saint-Etienne are the team Paris Saint-Germain have faced the most all competitions since the arrival of their new owners in 2011-12 (14 games: W10 D3 L1).
- PSG are the only team still to be unbeaten in the top five European leagues this season.
- PSG have scored 56 goals after 22 games in Ligue 1 this season, their best ever tally at this stage.
- Zlatan Ibrahimovic is averaging a goal every 82 minutes in Ligue 1 2015-16, his best ever tally in a season with PSG.
- Angel Di Maria has scored eight league goals this season, his highest tally ever in a single season since he arrived in Europe in 2007-08.