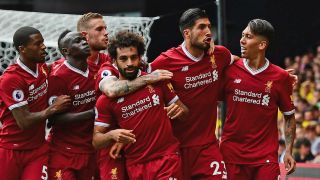 Liverpool have the firepower to 'blow Real Madrid away' in Saturday's Champions League final, according to ex-Anfield star Jamie Redknapp.

Jurgen Klopp's side will seek to prevent Madrid claiming a third consecutive European crown in Kiev, having turned in some stellar performances en route to the showpiece.

Mohamed Salah, Roberto Firmino and Sadio Mane have scored 29 goals between them in this season's competition and Redknapp believes his old club have what it takes to overcome Zinedine Zidane's men in style.

"If Liverpool blew Real Madrid away, it wouldn't surprise me, it really wouldn't," the former England international told Omnisport.

"Because of the strikeforce they've got and sometimes the way that Real Madrid defend, they're an attacking defensive side. They don't really look at the defensive side of the game.

"It's not just Mo Salah. I think it would be disrespectful to not talk about Mo Salah, who's had an unbelievable season. If you look after Salah, Firmino will hurt you and it's the same with Mane.

"There's so many different options and I think for Liverpool to not miss [Philippe] Coutinho after selling him [to Barcelona] for so much money just shows how well the manager has done."

Robbie Fowler, another favourite on the Red half of Merseyside, is also hopeful Salah can be the man to make the difference.

"He's been fantastic," said Fowler, who scored 183 goals in 369 appearances for Liverpool.

"I don't think anyone could've foreseen what was going to happen, but he's been magnificent.

"Fingers crossed he can do it in the Champions League final."