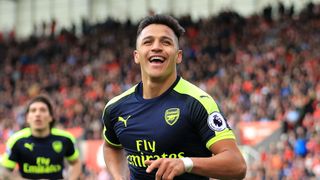 Arsene Wenger says Arsenal have a big job on their hands to keep Alexis Sanchez but insists the club are in complete control of the situation.

Sanchez is out of contract in 2018 and plans to speak to Wenger at the end of the season amid intense speculation linking him with a move to Bayern Munich, among others.

The Chile international has spoken of his desire to compete for the biggest trophies in football and his frustration at Arsenal's inability to challenge for them this season.

But ahead of Saturday's crucial FA Cup final against Chelsea, Wenger reiterated that the club hold all the cards.

"We have nobody at the end of their contract so that will be completely our decision," said Wenger.

"Therefore, I just believe that the club has of course got a big job to do in the summer because you want keep players like Alexis and all the speculations can happen."

Wenger was asked about the importance of commitment given he is out of contract at the end of the season and Sanchez, who has scored 29 goals this season, is one of a number of key players to only have a year left to run.

"If you have surgery tomorrow and it is the surgeon's last day of work – you still want him to do good work and not half a job because it is his last day," said the Frenchman.

"That is being professional. I have ended contracts before and always ended exactly the same.

"Alexis' contract ends in 2018 so it is a different situation."

The latest on ?“Knowing him, his character and commitment to the club, he’ll do everything to be fit to start.” May 24, 2017

While Wenger concedes Arsenal do not have the biggest budget in European football, he is confident the club are well placed in terms of quality and financial strength to compete at the highest level.

"We are in much better position now. I guided this club for years with very limited resources when we had to sell all our players.