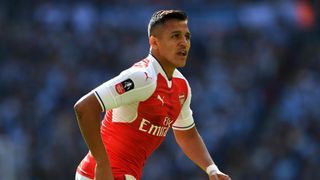 Lothar Matthaus feels Arsenal attacker Alexis Sanchez would be an excellent addition for Bayern Munich amid suggestions the Bundesliga champions are pondering a swoop for the Chile international.

Sanchez's contract with Arsenal expires in June 2018 and talks over a new deal have been put on hold until the end of the season after both parties failed to reach an agreement.

Arsene Wenger remains hopeful Sanchez will stay at Emirates Stadium, but clubs such as Bayern, Manchester City and Chelsea are reportedly keeping a close eye on the 28-year-old's situation.

"Sanchez is a great player, he would be a good signing for Bayern," Matthaus told AZ.

"His biggest pro is that he can play in a central role up front and on the wings.

"He would not only be an alternative to Franck Ribery and Arjen Robben, but could also replace Robert Lewandowski as Bayern's number nine whenever he is unavailable."

The potential arrival of Sanchez would be bad news for Douglas Costa, but Matthaus is not convinced the Brazil international has what it takes to play for Bayern following a string of underwhelming performances this campaign.

"Costa is no longer the player he was when he just started at Bayern," he added.

"Plus I do not like it that he has been hinting at a transfer in a number of interviews. That is not good for him, nor for Bayern.

"I think the club would not stop him from leaving if they bring in another attacker."