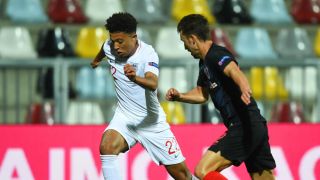 Harry Kane and Eric Dier hailed Jadon Sancho after the 18-year-old made his England debut in Friday's goalless draw with Croatia.

The Borussia Dortmund winger replaced Raheem Sterling with 12 minutes remaining in Rijeka to become the first player born after 2000 to represent the Three Lions.

Sancho impressed during his late cameo and team-mates Kane and Dier believe that if he continues to work hard he will enjoy a fruitful career with the national side.

"Big congratulations to him for his debut. I thought he came on and made an impact as well.

"He's been great in training and he has just got to keep working hard and playing games and I'm sure he will have a very bright future."

A real honour putting the England shirt on tonight and representing my country. Thank you to everyone for the messages! The journey continues.... October 12, 2018

Eric Dier was also full of praise for the former Manchester City player, adding: "I think he was fantastic when he came on.

"He was direct and technically he's very gifted. Hopefully he can be a big part of England in the future if he keeps working hard."

Sancho will be hoping for a first England start on Monday when Gareth Southgate's side travel to Spain for their next Nations League encounter.