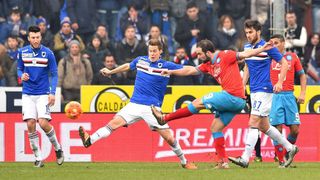 Napoli coach Mauricio Sarri believes Gonzalo Higuain is becoming the best striker in the world and would not swap him for Bayern Munich star Robert Lewandowski.

Higuain has been persistently linked with a move to Bayern Munich despite Lewandowski's strong goalscoring record at the Allianz Arena.

The Poland international, who took his Bundesliga tally for the season to 17 with a double in the 2-1 win over Hamburg on Friday, admitted this week he was unsure why such rumours had surfaced given his form.

But Sarri stoked the reports by suggesting the Argentina striker is the better of the pair after he scored his 21st Serie A goal in as many appearances in the 4-2 win over Sampdoria on Sunday.

"Higuain is becoming what I always thought he should be – in other words, the best striker in Europe and perhaps the world," the Napoli coach told Mediaset Premium.

"Higuain is like a dog, devouring any chance he gets. I would not exchange him for anyone, not even Lewandowski."

Sarri received a two-game Coppa Italia ban following a heated row with Roberto Mancini in the closing stages of their 2-0 defeat to Inter.

On Sunday, he donned a scarf belonging to the Inter boss which was given to him by television show Le Iene in homage to his colleague.

"There's no point looking at the table now as there's a long way to go. We are happy with what we are doing. Of course, this week remains bitter because of the error I made in the Coppa Italia," he said.

"Today I wore Mancini's scarf because it was a promise I made to Le Iene [TV show] and I was happy to keep it. This was my gesture of peace."