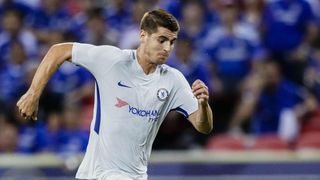 Maurizio Sarri says he is still waiting for "the best" Alvaro Morata as he dodged a question about Chelsea targeting Gonzalo Higuain.

Morata impressed in a 1-1 International Champions Cup draw with Inter on Saturday, helping to create the opening goal for Pedro.

The Spain striker, omitted from his country's World Cup squad, has been linked with a return to Serie A, where AC Milan are said to be keen on the 25-year-old.

Reports have indicated Chelsea in turn are trying to lure Higuain to Stamford Bridge, with the Argentina attacker potentially free to leave Juventus after their €112million capture of Cristiano Ronaldo.

Sarri was offering no clues as to the possible transfer merry-go-round that could develop before next month's deadlines across Europe, though, with Milan also reportedly a potential destination for Higuain.

"I'm still waiting for the best Morata," Sarri told reporters when asked about former Napoli striker Higuain after Chelsea triumphed on penalties in Nice on Saturday.

"In the first match Morata did not play very well, in Australia [in a 1-0 defeat of Perth Glory].

"But tonight, especially in the first 30 minutes, he improved a lot. I am satisfied and I am very confident in him for the future."

Jorginho was particularly impressive against Inter as Sarri begins to impose his tactics and style of play on his new club.

"Because we move the ball very quickly? This evening we moved the ball well, but I think not at the right speed.

"You have to move the ball at a great speed on the floor, otherwise we risk playing for 90 minutes with 75 per cent of possession but without scoring. So we have to improve on this.

"For Jorginho, this is a normal match. I think Jorginho has technical ability but he has a great spirit and mentality. So for this way of football, Jorginho is a wonderful player."

Sarri met Chelsea owner Roman Abramovich prior to Saturday's match but he would not reveal any details about their conversation.

"It's normal," Sarri said. "I think it's normal but also I think it was a private meeting so I don't want to speak about this. I'm sorry!"