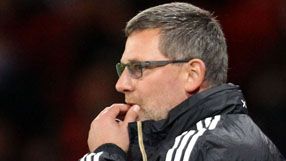 Two more World Cup appearances since in 1990 and 1998 are a paltry return for the passionate Scottish fans, whose side travel to Wales on Friday hoping for a win to boost hopes of a long-awaited return to the pinnacle of soccer in 2014.

Wales have faced harder times with no World Cup finals matches since 1958 and twice against Scotland, in 1977 and the fateful Stein match in 1985, they looked on aghast as referees awarded controversial penalties against them.

"Without doubt, Welsh football history is defined by three penalties, two given against us against Scotland and the one we missed against Romania in 1993," said former striker Ian Rush.

In 1977, Scotland won a disputed penalty and handed Wales a 2-0 defeat ahead of the 1978 Argentina World Cup.

Then in 1985, Stein's last match in charge, Scotland trailed 1-0 at half-time before he introduced Davie Cooper on the hour and his expertly-taken penalty after 81 minutes sealed the team's place in a World Cup play-off.

In 1993 Welsh left-back Paul Bodin missed a penalty that would have put his team 2-1 up in a match they needed to win in order to qualify.

"The devastation I felt in 1985 didn't compare to 1993," added Rush. "I remember sitting in the dressing room when [manager] Mike England told us what happened to Jock Stein, and all we thought about was one of the greatest managers ever had died."

With two draws from their opening two World Cup 2014 Group A qualifying matches and with Serbia, Belgium, Croatia, Macedonia and Wales in their way, the Scots would do well to recall Stein's spirit and enthusiasm for the game.

Stein guided Celtic to the European Cup in 1967 when they became the first British club to win the title.

After his death, Scotland were taken over by Sir Alex Ferguson and beat Australia to advance to their fourth straight World Cup finals, a far cry from the current barren spell of 14 years without an appearance at a World Cup or European Championship.

"Everyone knows it has been too long since we last qualified for a major finals," said Scotland striker Steven Fletcher, who has rediscovered his passion for the side having returned from a two-year hiatus after a fall-out with the management.

Nothing should fire up Scotland more than the 106th meeting of the old rivals said manager Craig Levein, wary of a Welsh backlash after a 6-1 drubbing by Serbia in their last qualifier.

"They are not as bad as Pot Six - not anywhere near it," he said referring to Wales' position in the table. "And we've got this additional history and this British conflict."

Leading the Welsh efforts will be winger Gareth Bale, who Scotland midfielder Charlie Adam has clashed with in the past.

"If you look through their team, with everyone fit, they are a formidable-looking side," said Levein. "Bale is just a top, top player who any club in the world would be happy to have - he's an impact player and one of the best in the world.

"But they've got other exceptionally good players in the team. The biggest difficulty with Wales,