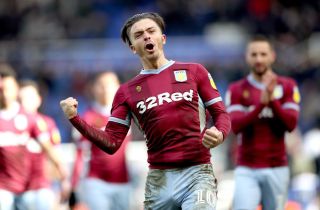 Grealish, born in Birmingham and a Villa fan, has been heavily linked with a move away from his boyhood club since they were relegated from the top flight in 2017.

Tottenham failed with a bid to sign him last summer, making their move too late in the transfer window as the takeover went through, and the Champions League finalists are reported to be set to renew their interest in the 23-year-old attacker.

Many observers feel Grealish will be playing in the Premier League next season, regardless of whether Villa win Monday’s Championship play-off final against Derby.

Whelan thinks victory at Wembley and the chance to captain Villa in the Premier League would be an enormous incentive for Grealish to remain at the club.

“He is Villa through and through,” said Whelan. “Jack wants to play in the Premier League and he wants to play as high as he can, but he will be the first one to tell you he wants to do that with Villa.

Whelan’s own future could be just as uncertain. The 35-year-old is out of contract in the summer and has yet to discuss a new deal.

He insists he still has much to offer but the Irishman’s only concern at the moment is the play-off final against Derby.

“It’s not an issue. I have not spoken to the manager,” said Whelan. “I am never knocking on doors or busting down doors to find what is happening.

“If we get the win, something will happen. I am worried about Monday and getting the right result before anything else.”

Villa are in the play-off final for the second year running. They missed out on an immediate return to the Premier League after they lost 1-0 to Fulham 12 months ago.

Many members of that squad remain at the club and Whelan insists Villa can use that defeat to spur them on this time round.

“If you saw how we all were afterwards, it is definitely motivation to go out and turn things around,” he said.

“Everyone wants to play in the Premier League, it is the best league in the world. For us to be one game away, we have to use it as motivation and embrace everything which comes with it.

“We have to try and enjoy it and if we get the right result we will be heroes. On the opposite side of that, if you don’t get it done then it is a massive disadvantage.

“We will be using it to our advantage, what happened last year. It is different now, a different manager and a different mentality. We will be worrying more about ourselves rather than worrying about Derby.”