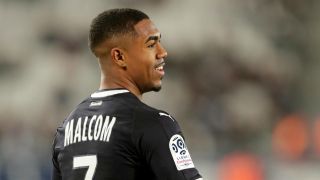 Roma president James Pallotta will only forgive Barcelona for their "immoral and unethical" signing of Malcom if Lionel Messi is sent as a peace offering.

The Serie A side were on the verge of completing the capture of the highly rated winger when Barca gazumped them with a last-ditch bid of €41million.

Bordeaux accepted the offer and the 21-year-old was re-routed to Spain having been set to board a flight for a medical in Rome.

Pallotta claims his club already had a deal in place and that Malcom was eager to join, only to turn his back on the transfer within a matter of hours.

In an interview with Sirius XM, the American businessman condemned both Barca and Bordeaux and confirmed his intention to take legal action.

"In terms of Barcelona, it looks like a pattern for them over the last few years of doing things that just should not be done at a club with the reputation that Barcelona intends to have," Pallotta said, as quoted by his club's website.

"In fact, they apologised for their actions and how they went about things. I don't accept the apology.

"The only way I'll accept it is on either one of two conditions: one, they give the player to us. That's obviously not going to happen.

"Two, maybe as a goodwill gesture at the very least they could send us Messi!

"I think in this case the player wanted to come to us. I think a lot of clubs were interested in him but did not want to bother him because maybe they did not think they had a shot at him in terms of the timing.

"We had a guy over there talking with the player in person. The deal was done.

"I have zero problem battling it out for a player with another big club, if we are all going through the same process trying to get him. That's the way it works.

"But, at the end of the day, when the deal is done and completely agreed… we all know how it works, the kid comes in for a medical and then it is signed.

"Other teams know not to come in and do what Barcelona did. Bordeaux should never have done what they did – the legal side will come later, but it is immoral and unethical too."

The incident marks another chapter in a burgeoning rivalry between Barca and Roma, the Italian outfit having memorably mounted a stunning fightback to dump the Liga giants out of last season's Champions League quarter-finals.