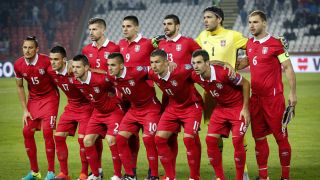 While Serbia are on track to qualify for next year's World Cup in Russia, there are problems beneath the surface.

As former midfielder and the country's most-capped player Dejan Stankovic puts it, Serbia are "well on the way to the World Cup" under head coach Slavoljub Muslin, who has the Balkan nation top of Group D after five games.

But, domestically, Serbian football is struggling.

Once the home of European champions - Red Star Belgrade in 1991 - the SuperLiga provides little on the continental stage as finances cripple the titleholders and city rivals Partizan in their attempts to challenge abroad, despite maintaining a reputation as a production line for some of Europe's finest players.

Still recovering from the tumultuous breakup of Yugoslavia, Red Star have failed to qualify for the Champions League proper since 1992 - a year in which the Belgrade side competed in the group stage, won the Intercontinental Cup and finished runners-up in the UEFA Super Cup - a far cry from the glory days of Dejan Savicevic, Sinisa Mihajlovic, Robert Prosinecki and Darko Pancev, who helped the Serbian giants conquer Marseille and Europe 26 years ago.

While Red Star - who lost in the third round of Champions League qualifying this season - continue to dominate domestically, they are struggling to reach the lofty heights of 1991 but club icon Stankovic believes a limit in foreign players competing in the SuperLiga might help.

Speaking to Omnisport, Stankovic - who won four trophies during his time in the Serbian capital before moving on to Lazio and then Inter - said: "Serbia has a lot of talented athletes and football players. Children in general like sports and football. I know that FSS has decided about limiting the number of the foreign players for next season, which means that domestic players will have an advantage.

"However, there is a market where the material status is very important and it is much better for football clubs in Western Europe. That is the reason why young talented players leave too early.

"It is very difficult to make changes because the market is open and free for every available player. The most important thing is that the clubs in Europe like Crvena Zvezda [Red Star] have to be financially stable and retain young talents at least for a few years."

A so-called Balkan league has also been proposed to help clubs compete in Europe.

The regional competition would combine teams from Serbia, Montenegro, Croatia, Bosnia-Herzegovina, Slovenia and Macedonia, but Stankovic does not feel it is the solution.

“The UEFA president is not against the idea of regional leagues or a potential Balkan league," he said.

“He is open to the idea but he strongly believes that domestic leagues are the foundation of football and that any potential regional league could only be played in addition to domestic leagues.”

In the meantime, Branislav Ivanovic, Dusan Tadic, Nemanja Matic and Aleksandar Kolarov are leading the way on the international stage as Serbia look to qualify for their first major tournament since 2010.

"Serbia are well on the way to the World Cup. That is the best proof of the quality of these players," Stankovic concluded. "I am following their careers at club level and I think their roles are deserved. Otherwise, Serbia are a team, and only as a team they can go to the World Cup.

"Tadic is a player who makes a difference. A player who can resolve every game, and he will make progress in his career, no doubt.

"Marko Grujic [of Liverpool] is a talent of European and Serbian football. He plays in a good club with a great coach. His departure from Crvena Zvezda depended on financial conditions but there is no reason to regret because he will get all conditions for progress. He has to be devoted and disciplined and to listen to his coach."