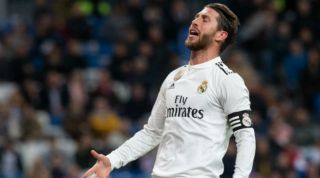 The 33-year-old reportedly had a fiery exchange with club president Florentino Perez in the dressing room after Real Madrid's humiliating second-leg performance against Ajax in the Champions League in March.

Relations are yet to improve between the pair and Spanish newspaper AS report that the Madrid captain is considering his future at the club - or away from it - as a result.

Ramos, who has won 20 trophies with Los Blancos, didn't play in that match after being booked in the first leg - a yellow card he was later sanctioned for by UEFA after picking it up deliberately.

If he is to leave the Bernabeu this summer, there are a number of possible suitors around the world.

Manchester United were linked with the centre-back in 2015 before he extended his contract and have already been in touch according to the report; likewise Liverpool, as Jurgen Klopp eyes a dream partnership with Virgil van Dijk.

Juventus are also keen and favourites to get the Spaniard, who could be tempted by the lure of playing with Cristiano Ronaldo again, though a huge offer from China could also take Ramos to Asia.