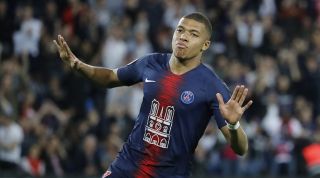 Goalscorers have all the fun, don't they? Lead the line, score the goals, get the points, save the cheerleader, save the world. Or maybe we just got that last bit confused with something else. Hmm.

Traditionally in English football, fans crave a 20-goal-a-season striker – but some stars have surpassed expectations quite spectacularly down the years. Seven different Premier League players have notched 30 goals in a campaign since the year 2000, and in 2017/18 the record was broken for goals in a 38-game season.

The big 3-0 has come a little easier elsewhere in Europe – but no prizes for naming the two La Liga players who account for 15 of the 41 entries below. Two others have achieved the feat in Spain, mind, so the limelight isn't entirely theirs to hog.

Anyway: see how many of the 22 other players you can recall who've enjoyed 30-goal seasons in the Premier League, La Liga, Serie A, Bundesliga, Ligue 1 and the Eredivisie – one of whom did it for the first time in 2018/19. We've put five minutes on the clock for you to name as many as you can and then tell us how you got on @FourFourTwo, with retweets up for grabs to those who don't give away spoilers. Good luck!