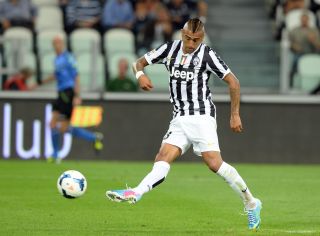 Antonio Conte's men defeated the Rome club 4-0 in the Supercoppa Italiana earlier this month, and looked set for a similarly comfortable outing when Arturo Vidal notched twice in the opening 26 minutes.

Miroslav Klose's goal gave the visitors hope of a turnaround before the break, but further strikes from Mirko Vucinic and Carlos Tevez ensured the reigning Serie A champions would cruise to the win.

Both managers named unchanged teams following opening-day victories, and their charges responded by taking little time to get going in an entertaining start to the match.

Hernanes carved out the first real opportunity for the visitors, but could only shoot straight at Gianluigi Buffon having connected with a chipped ball over the Juve defence.

But the hosts replied in kind, with Vucinic denied by a fine piece of defending from Lorik Cana as he looked to get a shot off after Andrea Pirlo had played him through.

The crowd would not be forced to wait long for a goal, though, as Vidal opened the scoring with just 14 minutes on the clock.

The Chilean latched on to a fabulous chip over the defence from Paul Pogba and showed remarkable composure to poke the ball underneath opposition goalkeeper Federico Marchetti.

And 12 minutes later Vidal had his second courtesy of a cool side-footed finish after Leonardo Bonucci had walked up from the Juventus defence to play his colleague through on goal.

Lazio had, in truth, played a more prominent role in the game than the scoreline suggested, and so there was a sense of justice when Klose got on the scoresheet two minutes after Vidal's second.

The German striker was the quickest to react to a rebound from a Hernanes effort and slotted expertly beyond Buffon to bring his team instantly back into the game.

The goalmouth action somewhat calmed down after that goal, though Lazio went close on two occasions as Antonio Candreva's free-kick whistled past the post and Buffon had to be alert to keep out Hernanes' drive.

Lazio ended the first half undoubtedly on top, but just four minutes after the restart the hosts' two-goal advantage was restored.

Bonucci again provided the assist, chipping a long pass from the back into the path of Vucinic, who held off his man expertly on the turn before poking past Marchetti.

And Lazio's task would become even more difficult on the hour mark as Hernanes, in a clear show of frustration, attempted to handle a cross from the left into the Juve goal and subsequently saw a deserved second yellow card.

Carlos Tevez almost rubbed salt in Lazio wounds in the 71st minute, only for his left-footed effort from the edge of the box to come back off the bar.

But the Argentinian would have his goal soon after, his third in as many games for his new club, as he swept the ball home from distance following an intelligent leave from Vucinic.