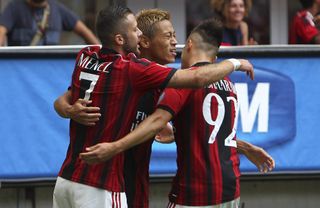 A legend at Milan, Inzaghi was appointed as Clarence Seedorf's replacement in June and the Italian is tasked with returning the club to their former glories after a dismal 2013-14 campaign.

Alex, another new signing for Milan, turned the ball into his own net midway through the second half as Lazio reduced the deficit, but the visitors' evening was summed up when Antonio Candreva won and then missed an injury-time penalty as Milan debutant Diego Lopez denied him with an excellent save

Like their hosts, Lazio are also under new management, but Stefano Pioli was unable to garner anything from his first Serie A match in charge.

The result means Lazio's long wait for a league win at San Siro goes in, with their last triumph coming back in 1989, when Paolo Maldini's own goal secured a 1-0 victory.

Milan made a bright start and were ahead as early as the seventh minute courtesy of a fine counter-attacking goal.

Stephan El Shaarawy outpaced De Vrij down the left-hand side and delivered a low ball across the box to Honda, who finished first time through the legs of Etrit Berisha.

The remainder of the first half was less eventful than the all-action opening and Lazio threatened briefly in the 37th minute when a fine flowing move was brought to an end by Cristian Zapata's timely challenge on Basta.

Lazio made a positive start to the second period, Miroslav Klose seeing a shot blocked before Alex had to be alert to clear Basta's dangerous cross from the right.

De Vrij then fizzed a 30-yard strike narrowly over the crossbar, but Lazio's hopes of an equaliser were dashed as Muntari doubled Milan's lead in the 56th minute.

The Ghana international threw himself at Ignazio Abate's right-wing delivery and prodded the ball home from six yards.

Milan looked to have put the result beyond doubt eight minutes later when Menez converted a penalty after referee Nicola Rizzoli adjudged he had been felled by De Vrij inside the area.

As Lazio pressed for a second, Lopez reacted smartly to keep out Candreva's powerful volley at his near post five minutes from time, before the winger was fouled in the area, leading to Rizzoli pointing to the spot.

However, Lopez made a superb save low down to his left to deny the Italy international and round off a positive start to the Inzaghi era.