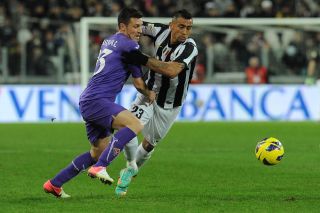 Roma continued their 100 per cent start to the season with a 2-0 win over Napoli on Friday, meaning a win for Antonio Conte's men will move them three points clear of Rafael Benitez's side.

Juve have dropped points only once in the league this season, a 1-1 draw with Inter in September, and are currently on a four-game winning streak domestically.

Conte's men will fancy their chances of returning to Turin with three points, thanks to Fiorentina's mixed recent form and Juve's impressive record in Florence.

Vincenzo Montella's side have not won in their last three Serie A games and failed to beat Juventus in their last 10 competitive attempts.

Fiorentina have failed to score against Juventus in their previous three clashes although, in the same fixture last season, Juve were limited to just two shots on target - the fewest in a single game during Conte's reign.

They last took three points against the Turin side in March 2008 but Fiorentina forward Giuseppe Rossi, who has six goals in all competitions this season, is intent on ending that run on Sunday.

Rossi returned to the Italy squad for the final FIFA World Cup qualifiers, making his first international outing since October 2011, but is focused solely on his club football, and not a spot at Brazil 2014.

"We are coming off two horrible home draws against Cagliari and Parma," he told the Gazzetta dello Sport.

"Now I'm thinking of a goal against Juventus because I live in the present and not the future. Don’t ask me about the Maracana, the World Cup or the Champions League.

"All I want to do right now is try to beat Juventus. If you are able to limit the influence of Andrea Pirlo then you have a nice advantage."

Rossi and defender Gonzalo Rodriguez have each scored two goals in Fiorentina's last five outings and Montella will need continued contributions from across the pitch due to the ongoing absence of Mario Gomez.

The Germany international scored twice in three Serie A appearances before suffering knee ligament damage against Cagliari in September, which is expected to keep him sidelined for another three weeks.

Gomez has challenged his team-mates to step up for the occasion and prove they can compete with the best Serie A has to offer.

"Sunday's match against Juventus is very important for our team and our supporters," he said. "The whole city is talking about this match.

"We have to play as we're able to play and prove our personality."

While Gomez is ruled out for the hosts, Juventus will be without Fabio Quagliarella due to an adductor injury.