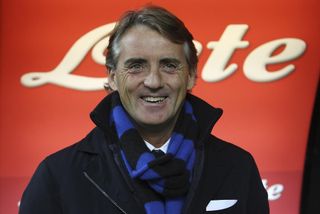 Roberto Mancini has been buoyed by two high-profile signings in recent days, with Lukas Podolski and Xherdan Shaqiri arriving from Arsenal and Bayern Munich respectively.

And while Inter have only won one of their last eight Serie A matches, Tuesday's 1-1 draw at champions Juventus provided cause for optimism, particularly as Massimiliano Allegri's side had claimed an early lead through Carlos Tevez.

Inter will now look to build on the growing feel-good factor at the club with a first home win since October.

It remains to be seen whether Shaqiri will feature this weekend after he signed a four-and-a-half-year deal on Friday.

Speaking upon his arrival in Milan, the Switzerland international told Inter Channel: "I would like to play on Sunday, but I do not know what will happen. Let's see."

Podolski will hope to be handed a maiden start after coming off the bench at Juve to make his Inter debut as a 54th-minute replacement for Zdravko Kuzmanovic.

The on-loan German could replace Mateo Kovacic, who is banned following his late red card in Turin for a crude challenge on Stephan Lichtsteiner.

Defender Juan Jesus is also missing through suspension for Inter. The Brazilian defender was retrospectively punished for an elbow on Juve's Giorgio Chiellini and will sit out his side's next four matches, having also picked up a fourth yellow card of the campaign.

Genoa's own new signing, Argentine midfielder Tino Costa, featured as a substitute when Gian Piero Gasperini's side came from two goals down to draw with Atalanta on Tuesday.

Costa, who turned 30 on Friday and is on loan from Spartak Moscow with a view to a permanent move, said at his official presentation this week: "I hope to acclimate quickly and adapt to the ideas of coach Gasperini."

Former Inter chief Gasperini has guided Genoa to fifth in the table, six places and five points above Mancini's team.

The Ligurian outfit will be without the suspended Sebastian Roncaglia this weekend as they aim to follow up that victory with another success.