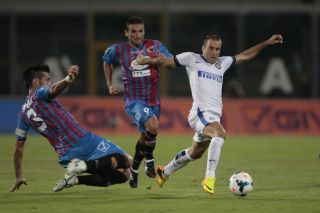 Walter Mazzarri's side have made an inauspicious start to the new year, picking up just one point from three league games either side of exiting the Coppa Italia with a 1-0 last-16 defeat at Udinese.

A run of one win from eight Serie A outings has left Inter fifth in the table, some 11 points adrift of third-placed Napoli and UEFA Champions League qualification.

However, Catania represent ideal opponents for the Milan giants as they seek to get their season back on track, with Rolando Maran's men sitting at the foot of the standings with just 13 points from 20 games.

Catania have won only three matches in Serie A this term, and have been beaten in all 10 of their away fixtures so far - conceding 27 goals and scoring just 6 in the process.

Indeed, the Stadio Angelo Massimino outfit have gone 16 top-flight games without a victory on the road, with their last away success coming at Parma on February 24 last year.

That sequence seems unlikely to end this weekend, as Inter have lost just one Serie A game at San Siro this season - a 3-0 reverse to second-placed Roma on October 5.

Catania got 2014 off to an ideal start by beating fellow strugglers Bologna 2-0 at home, but have followed that result up with three straight defeats.

Maran's first game back in charge, following his return to the club just three months after being sacked, saw them lose 3-0 at home to fourth-placed Fiorentina last weekend.

Mazzarri's side, meanwhile, were beaten 1-0 at Genoa on Sunday, with Luca Antonelli scoring the only goal late on.

Inter unsurprisingly have the edge in past meetings between the clubs - having lost just one of their last seven Serie A games against Catania - and won the reverse fixture 3-0 back in September.