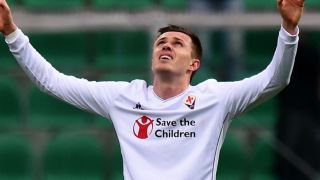 Fiorentina moved two points clear at the top of Serie A – for a few hours at least – after another impressive away-day showing at Palermo.

The Viola have now lost just one of their last five games on the road in the league with Josip Ilicic netting twice in a 3-1 success in Sicily.

Ilicic scored both of his goals before half-time to put the visitors in control and, after Palermo threatened a comeback via a late Alberto Gilardino strike, Jakub Blaszczykowski made sure of the points for Fiorentina.

Inter can reclaim top spot with a win at Empoli later on Wednesday.

Juve registered an eighth successive Serie A win with a 3-0 defeat of Verona in Turin.

The hosts' second came courtesy of a powerful Leonardo Bonucci header before half-time and Simone Zaza came off the bench to round off the scoring eight minutes from time.

Juve are now third, a point ahead of Napoli, who host Torino in the final game of the day.

Roma remain in fifth following a pulsating 3-3 draw at Chievo.

Sadiq Umar and Alessandro Florenzi handed Roma a 2-0 half-time lead only for Alberto Paloschi and Dario Dainelli to level matters after 58 minutes.

Roma went ahead again through Iago Falque, but Simone Pepe ensured a share of the spoils for the home side with five minutes to go.