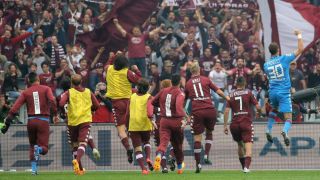 Juventus were made to wait for their Scudetto crown while Parma gave themselves a stay of execution from their impending relegation in Serie A on Sunday.

Both look all but certain to finish at opposite ends of the table although Juventus failed to move a step closer as they were beaten 2-1 by rivals Torino in the Derby della Mole.

Matteo Darmian and Fabio Quagliarella turned the game on its head after Andrea Pirlo's sublime free-kick opened the scoring, as Torino claimed a first victory over their city foes since 1995.

Victory for Juve, coupled with defeat for Lazio against Chievo would have ensured them a fourth consecutive title, although Alberto Paloschi ensured the spoils were shared at the Stadio Olimpico in a 1-1 draw.

At the bottom, Parma again showcased their intention to keep fighting as Antonio Nocerino's penalty gave them a 1-0 win over Palermo - a result that leaves them still 15 points off safety.

With Cesena going down 3-1 at Genoa, Cagliari took full advantage to move to 18th with a win by the same scoreline against Fiorentina in Gianluca Festa's first game at the helm.

Fans' favourite Festa was appointed as Gianfranco Zola's replacement in midweek and enjoyed a winning start thanks partly to Duje Cop's brace.

Atalanta twice came from behind to draw 2-2 with fellow strugglers Empoli in a result that sees both edge closer to safety.

In the day's final game, Napoli came from a goal to ease past Sampdoria 4-2 and pile the pressure on Roma in the bid for the final UEFA Champions League spot.

Emiliano Viviano allowed Manolo Gabbiadiani's deflected effort to dribble through his legs to equalise Raul Albiol's own-goal with Gonzalo Higuain scoring twice and Lorenzo Insigne netting for the first time since October after a long-term injury.

Verona were 3-2 winners at home to Sassuolo despite seeing Rafael sent off after just 18 minutes.

Veteran striker Luca Toni rolled back the years for the hosts with a brace that takes his league tally for the season to 17.