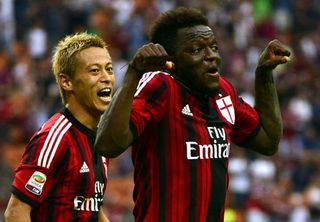 The Milan legend will have been pleased by his side's performance against a team that is widely expected to challenge for a place in Europe.

The hosts were ahead within just seven minutes, when Stephan El Shaarawy burst through the midfield before skinning his man and rolling to an unmarked Keisuke Honda, who finished with aplomb.

That lead was doubled 11 minutes after half-time, when a terrific cross from Ignazio Abate allowed Sulley Muntari to lash home a volley from six yards.

Lazio's Stefan de Vrij endured a torrid afternoon on his Serie A debut and gave away a penalty six minutes later after bringing down Jeremy Menez, who dusted himself off to slot home.

Three minutes later, though, the visitors were back in the game, as Milan's Alex slid in to meet an Antonio Candreva cross, poking the ball beyond his own goalkeeper at the near post.

That goal gave Lazio greater confidence, with Stefano Mauri rattling the post with a stinging volley, while Diego Lopez saved a late penalty as Milan held on.

Jonathan de Guzman enjoyed a dream debut for Napoli, helping them to a 2-1 win at Genoa.

The Dutchman popped up deep into stoppage time to latch onto a Juan Camilo Zuniga ball over the top, finishing from point-blank range to secure the win for Rafael Benitez's men, after Mauricio Pinilla had cancelled out Jose Callejon's early opener.

The result eases the pressure on the former Liverpool boss, after his side crashed out of the Champions League at hands of Athletic Bilbao in midweek.

Elsewhere, it was a Serie A debut to forget for Inter's Nemanja Vidic, as his side were held 0-0 at Torino.

The former Manchester United defender gave away a spot-kick after 20 minutes, although his blushes were initially spared thanks to a Samir Handanovic penalty save.

However, a difficult night was compounded deep into stoppage time when Vidic saw red for dissent.

The reality of Serie A is likely to have dawned on newly promoted Empoli, whose first game in the top flight for six years ended in a 2-0 defeat to Udinese, courtesy of a second-half brace from Antonio Di Natale.

In contrast, Cesena began their return to Serie A with a bang, beating Parma 1-0 thanks to a solitary goal from Alejandro Rodriguez.

Elsewhere, Palermo were held to a 1-1 draw at home to Sampdoria, Cagliari drew by the same scoreline at Sassoulo and Atalanta drew 0-0 with Verona.