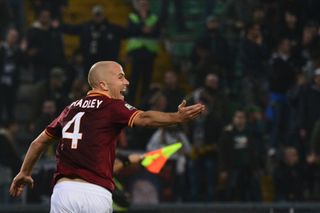 Rudi Garcia's men continued their remarkable start to the season as they made it nine wins out of nine in the league to stay five points clear at the top of the table.

Udinese looked set to end Roma's perfect record and they would have fancied their chances of beating the leaders when Maicon was sent off for a second bookable offence midway through the second half.

But Michael Bradley came off the bench to score the winner eight minutes from time as Roma proved they can cope with the absence of injured talisman Francesco Totti.

The Argentina striker opened the scoring from the penalty spot and added a second before half-time as Rafael Benitez's side got back on track following their defeat at Roma last weekend.

Juventus also slipped up in Serie A at Fiorentina last weekend, but they responded with a 2-0 home win over Genoa.

Arturo Vidal set the Turin giants on their way to victory with a penalty and Carlos Tevez scored the second before half-time to ensure Juve stay level on points with Napoli.

Parolo and Antonio Cassano put the home side 2-0 up at half-time, only for Alessandro Matri and Matias Silvestre to score in quick succession to get Massimiliano Allegri's side back on level terms.

But Parolo had the final say as he stunned Milan with a last-gasp winner that moved Parma above Milan and up to eighth.

Fiorentina built on their fine win over Juventus by coming from behind again to win 2-1 at Chievo.

Lazio eased the pressure on coach Vladimir Petkovic by securing their first win in six games as Cagliari were beaten 2-0.

Miroslav Klose came off the bench to score the opener and Antonio Candreva added a second from the penalty spot.

Catania were held to a goalless draw by fellow strugglers Sassuolo, while Bologna moved off the foot of the table courtesy of Jose Angel Crespo's early goal that secured a 1-0 win over Livorno.