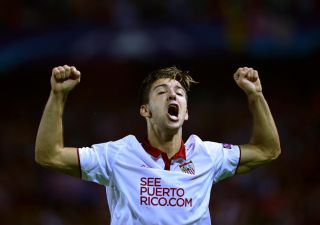 Sevilla cruised to a comfortable 4-0 win over Dinamo Zagreb on Wednesday to take charge of Champions League Group H and move to the brink of qualification for the knockout phase.

Jorge Sampaoli's men would have secured progression if Juventus had also beaten Lyon, but the French side claimed a commendable 1-1 draw in Turin, forcing Sevilla to remain patient with two matches to go - from which they need a solitary point.

The Europa League holders rarely looked like dropping points against Dinamo and Luciano Vietto's opening goal was just reward for a purposeful start, with Steven N'Zonzi also hitting the frame of the goal beforehand.

Ganso was unsurprisingly involved when Sevilla did finally get a second, with left-back Sergio Escudero providing a cool finish to cap off a great move.

Sevilla added gloss to the scoreline in the final 10 minutes - N'Zonzi and then Wissam Ben Yedder finding the net to secure a comprehensive victory and move on to 10 points from four games, while they continued their run of not conceding in this year's competition.

The home side dictated possession right from the start, with the elegant Ganso and N'Zonzi playing key roles.

But Dinamo's deep defence initially proved difficult to breach, as Sevilla struggled to find spaces in behind them in order to exploit the pace of Vietto and Vitolo.

A first chance eventually presented itself in the 22nd minute, though it came via a more direct route, as N'Zonzi met Escudero's left-wing cross, but his header was tipped on to the crossbar by Dominik Livakovic.

However, the goalkeeper perhaps should have done better as Sevilla went ahead just after the half-hour mark.

Franco Vazquez delivered a low cross after being released up the left flank by Ganso and Vietto turned his man before firing a shot that Livakovic could only parry into the goal at his near post.

Dinamo's task was made even tougher on the stroke of half-time thanks to Stojanovic picking up a second booking for a late tackle on Vitolo.

Sevilla's supremacy only got more convincing in the second half but Ganso could only scuff wide after inspiring a couple of one-twos on the edge of the area and the Brazilian was at the centre of things again shortly after, scooping an exquisite pass into the area for Vitolo, only for the Spain international to see his volley palmed away by Livakovic.

The hosts eventually netted a second in style. Ganso picked out Escudero on the left and the full-back exchanged a give-and-go with Vitolo, before skipping past a defender and clinically finding the bottom-far corner.

Sampaoli's men put the match beyond Dinamo's reach 10 minutes from the end, as N'Zonzi nodded in from a corner before substitute Ben Yedder added a fourth for good measure, firing home from close-range after the ball kindly ricocheted into his path.