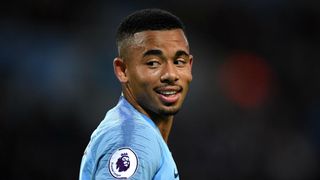 Gabriel Jesus should make sure he has plenty of sex to increase his chances of a successful World Cup, according to Brazil great Romario.

The former Barcelona striker was the hero of Brazil's triumphant 1994 campaign in the United States, scoring five times before a penalty shootout victory over Italy in the final.

Manchester City's Jesus is in line to shoulder the same burden of leading the line for the Selecao at Russia 2018 and Romario, now a federal senator in Rio de Janeiro, had a colourful tip on how the 21-year-old should make the most of his downtime.

"Have enough sex is one piece of advice - as is making the most you can of your days off," he told Lance.

"And, of course, you must concentrate on match days and during the games.

"I believe Jesus is quite aware of his football and what it represents for the Brazilian nation.

"He has to arrive at the World Cup and score a goal. That’s the most important thing."

Jesus faces a battle with Liverpool's Roberto Firmino to be Tite's starting striker in the finals and Romario believes calling upon the striking instincts that have seen him score 12 times in City's Premier League title triumph will be key.

"Jesus must understand that, at the World Cup, the first opportunity you get to score a goal may be your last," the 52-year-old said.

"The World Cup is a totally different competition from the others. You have to be 100 per cent focused, otherwise you won't give your best for your country.

"There is one thing Jesus must do - go to the World Cup and score goals.

"It is good that he is playing in Europe because maybe 80 or 90 per cent of the best players in the world play there and he will have faced them already."